Chevrolet Trax Named Safest Car of the Year in Korea 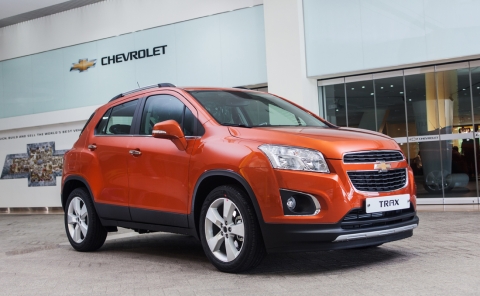 GM Korea today announced that Chevrolet’s all-new small SUV, the Trax, has been named the Safest Car of the Year by Korea’s Ministry of Land, Infrastructure and Transport (MOLIT).

SEOUL--(Korea Newswire) December 13, 2013 -- GM Korea today announced that Chevrolet’s all-new small SUV, the Trax, has been named the Safest Car of the Year by Korea’s Ministry of Land, Infrastructure and Transport (MOLIT).

The Trax received a first-class rating (93.5 points) in overall safety and the best score in the pedestrian protection category in Korean New Car Assessment Program (KNCAP) history. It was the safest car among the 11 vehicles tested by KNCAP in 2013.

In every crash test conducted by KNCAP, the Trax received the maximum five stars. It had perfect scores in the 56 km/h frontal crash test and side pole crash test. In addition, KNCAP reported that the Trax provided good protection for pedestrians in all areas.

“This is an important achievement for GM Korea,” said Steven Clarke, GM Korea Vice President of Vehicle Engineering. “It demonstrates our commitment to offering world-class safety in all of our products to meet our customers’ expectations.”

Safety has been maximized in the Trax through a sturdy body structure, 66 percent of which is made of high-strength steel. The Trax has adopted the Body Frame Integral System, which connects the upper frame and infrastructure of the chassis. This system offers a solid structure for stable high-speed driving and smooth, sophisticated handling.

The Trax comes with six driver, passenger and side curtain air bags as standard and its roof can endure 4.2 times its own weight to protect occupants in an accident.

It also comes with Electronic Stability Control (ESC), the Anti-Lock Braking System (ABS), the Traction Control System (TCS), Hydraulic Brake Assist (HBA) and Hill Start Assist (HSA). In addition, the Tire Pressure Monitoring System (TPMS) - which is only available as an option on other models - comes standard on all trim levels of the Trax to further enhance driving safety.

The Trax was awarded the top five-star rating by the independent European New Car Assessment Program (Euro NCAP) in May 2013. The Trax achieved maximum points in the side barrier test, providing occupants with good protection for all body regions. Good scores were also received for frontal impact, while the Trax provided good protection against whiplash injury thanks to adjustable seat and head restraints.

The full Trax crash test results can be viewed here.

Founded in 1911 in Detroit, Chevrolet is now one of the world's largest car brands, doing business in more than 140 countries and selling more than 4 million cars and trucks a year. Chevrolet provides customers with fuel-efficient vehicles that feature spirited performance, expressive design and high quality. The Chevrolet portfolio in Korea includes the iconic Camaro performance car and award-winning passenger cars and crossovers such as the Spark, Aveo, Cruze, Malibu, Orlando and Captiva. More information regarding Chevrolet models and its market-leading warranty can be found at www.chevrolet.co.kr.

All releases from GM Korea Company