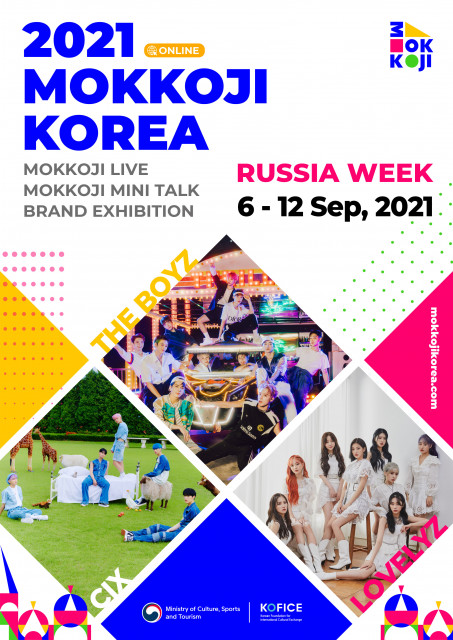 SEOUL--(Korea Newswire) August 31, 2021 -- The 2021 MOKKOJI KOREA, a festival of popular K-pop singers and Hallyu fans around the world, will be held online from September 6 (Monday) to November 14 (Sunday). It debuted last year as a platform for exchanges of lifestyle and culture, such as food, beauty, fashion and games, between South Korea and the rest of the world. MOKKOJI is a pure Korean word that means a gathering of people for games, parties and other occasions.

MOKKOJI KOREA selects ‘Focus Countries’ each year to celebrate them with ‘MOKKOJI FESTIVAL.’ This year, Russia, India and Indonesia have been selected and they will be feted each for a week of every month from September to November. The ‘Russia Week,’ the first to open in September, has significant meaning in that South Korea and Russia designated 2020 the year of the Korea-Russia Year of Cultural Exchanges to mark 30th anniversary of their diplomatic ties.

MOKKOJI FESTIVAL for Russia Week will run from September 6 (Monday) to 12 (Sunday), featuring K-pop singers THE BOYZ, Lovelyz and CIX. During the MOKKOJI FESTIVAL, ‘MOKKOJI MINI TALK,’ ‘MOKKOJI LIVE’ and an online ‘BRAND EXHIBITION’ will be held and offer global Hallyu fans a chance to deepen their understanding of the lifestyles and cultures of Korea and Russia.

Through online ‘BRAND EXHIBITION’, information on South Korean businesses performing well in Russia and their products will be introduced.

On September 12 (Sunday), the last day of Russia Week MOKKOJI FESTIVAL, ‘MOKKOJI LIVE’ will begin at 12 pm (MSK). THE BOYZ, Lovelyz and CIX will stay connected with fans for three hours through live performance and an online fan meeting. Lisa Kelley and Angelina Danilova will emcee the event and fans will have an opportunity to understand and experience the cultures of both countries. Applications for participation in the online fan meeting will be accepted on the website of MOKKOJI KOREA from August 24 to September 3.

The official website of the 2021 MOKKOJI KOREA will also feature a web drama and a webtoon on Korean lifestyle and culture. The webtoon ‘The first spring with you’ depicts a Russian girl’s yearlong life in Korea as an exchange student, while the web drama ‘MOKKOJI KITCHEN’ is a romantic comedy set in a Korean restaurant. The two works are expected to offer a new experience to those Hallyu fans keen on the Korean lifestyle and culture. ‘MOKKOJI KITCHEN’ slated to premiere on September 6 (Monday) stars Gongchan of B1A4, a K-pop boy group, as Muyoung, a protagonist who runs a Korean restaurant. Hallyu fans have high expectations for him.

Besides, ‘MOKKOJI CONTEST,’ ‘ONLINE GAME,’ ‘K-LIFESTYLE WIKI,’ and ‘K-LIFESTYLE WEBZINE’ will also give Russia and other countries amazing opportunities to experience the Korean culture through participatory content.

President of the Korean Foundation for International Cultural Exchange, Jung Gilhwa, said, “Russia saw its Hallyu fan club membership swell from 11.61 million to 15 million in the past year. I hope the Russia Week will be a starting point for both countries to better understand each other’s lifestyle and culture and further develop bilateral relations.”

Visit 2021 MOKKOJI KOREA’s official website (mokkojikorea.com) for its major programs and schedules. Most content is provided in Russian and English.

All releases from KOREAN FOUNDATION FOR INTERNATIONAL CULTURAL EXCHANGE (KOFICE)