Amazing lineup of artists such as American singer Kehlani as well as many other exciting things to see and enjoy, including fan meetings, Korean cultural experiences, etc. 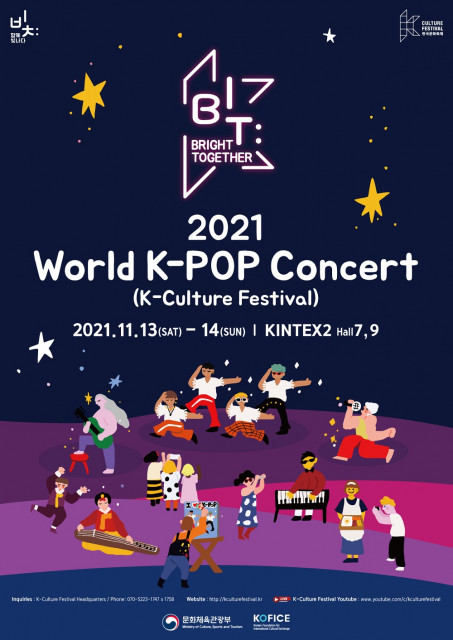 2021 World K-POP Concert (K-Culture Festival) is held at the Korea International Exhibition Center in Korea on November 13 and 14, and the concert will be livestreamed in real-time via the K-Culture Festival’s YouTube channel.

SEOUL--(Korea Newswire) November 09, 2021 -- 2021 World K-POP Concert (K-Culture Festival) hosted by the Ministry of Culture, Sports and Tourism of the Republic of Korea (MCST, Minister Hwang Hee) and the Korean Foundation for International Cultural Exchange (KOFICE, President Jung Kil-hwa) kicks off at the Korea International Exhibition Center (KINTEX) in Goyang-si , on Saturday, November 13 and Sunday, November 14. The concert will be livestreamed in real time via the K-Culture Festival’s official YouTube channel.

With heightened anticipation from global K-culture fans as many countries around the world have entered into ‘Living with COVID-19 Era,’ the below is an introduction of the main programs at the ‘2021 World K-POP Concert (K-Culture Festival)’ and key things to watch for at the concert.

First, guests can meet with world-class local and international artists at the ‘2021 World K-Pop Concert (B.I.T 4 U Concert)’ held at 7 pm on November 14. The amazing lineup of local artists includes ‘NCT DREAM’, ‘SHINee KEY’, ‘aespa’, ‘ITZY’, ‘PENTAGON’, ‘Simon Dominic’, ‘Loco’, and ‘BraveGirls’. With Lia from ITZY and Jeno from NCT DREAM hosting the event, the concert is making headlines. In particular, American pop star Kehlani, who is regularly mentioned among many K-pop stars as an artist they want to collaborate with, will be delivering a virtual performance.

On top of this, various digital technologies such as 360-degree VR shooting, AR video technology, and 3D stereoscopic sound will be integrated to convey the concert’s atmosphere more vividly for online viewers.

In addition, a K-Culture Fan Fair (sub theme: B.I.T for ALL) will be hosted at the concert as a concurrent experiential program for fans. Under the slogan of ‘BIT: Bright / Together,’ the Fan Fair will have an array of experiential events, in which fans can participate firsthand at KINTEX 2 Exhibition Hall 7 for two days on November 13 and 14.

Meanwhile, the ‘2021 Global Entertainment Expo (Hosted by MCST and the Korea Entertainment Producer's Association)’ will also be held at Exhibition Hall 8 during the same period, and this event will serve as an opportunity to provide a glimpse of the present and the future of relevant industries.

For more details about the ‘2021 World K-POP Concert,’ visit the official website at kculturefestival.kr. Information on ticket reservations will be announced through the K-Culture Festival official website and social media channels.