Suggested strategies for zero carbon emission from power generation, power network reinforcement and optimal operation, and securing of key technologies on time
Entered into a business agreement for promoting technology development strategies and projects, and promoting mutual cooperation to support the realization of the vision 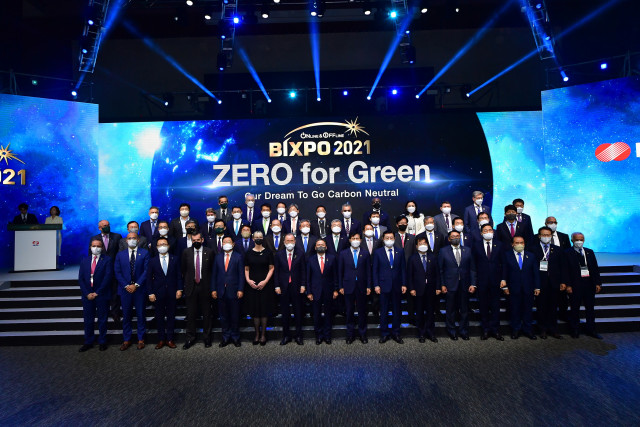 The vision declaration was organized for public power companies to express their strong commitment to fulfilling the responsibility for carbon neutrality and turning it into a new opportunity.

At the same time, the companies announced the joint technology development strategies for supporting the fulfillment of the vision along with a key project to implement the strategies and entered into a business agreement to further strengthen solidarity and cooperation.

The ‘ZERO for Green’ conveys the public power companies’ strong commitment to leading innovation for achieving carbon neutrality throughout the value chain process of the power industry, such as energy production (power generation), distribution (power network), and use (efficient consumption). The ‘ZERO’ stands for Zero Emission, Reliable Energy, and On Time.

To achieve ZERO for Green, it is necessary to select essential technologies for realizing carbon neutrality in the energy transformation sector and to improve technological level by expanding investment in the technologies.

For the carbon-neutral technology development strategies announced together with the vision declaration, improving the efficiency of energy supply and consumption, expanding renewable energy to reduce carbon emissions in power generation industry, transforming to hydrogen and ammonia fuel, and establishing an intelligent power grid for power distribution to consumers were set as the key technological development areas, and the promotional directions for each area were suggested.

Recognizing the importance of cooperation in developing, verifying, and spreading key technologies in the process of realizing carbon neutrality, the public power companies entered into a business agreement for carbon neutrality in order to solidify and declare their cohesive power, and thus further promote solidarity and cooperation in all areas of the power industry ecosystem.

The vision declaration holds significance as it was the first official declaration of public power companies’ will to establish and implement a joint vision and strategies for realizing carbon neutrality as the key players for energy transformation.

While continuously focusing their capacities on achieving ‘ZERO for Green,’ the carbon neutrality vision, the public power companies will encourage domestic and international stakeholders’ participation in the energy industry ecosystem for de-carbonization and technology innovation based on solidarity and cooperation, and ultimately promote joint efforts to realize the national goal of carbon neutrality.