Debuting on mobile and MacOS, the latest FarmVille franchise title empowers players to bring their own unique farm to life with endearing characters, lovable animals and unique gameplay features 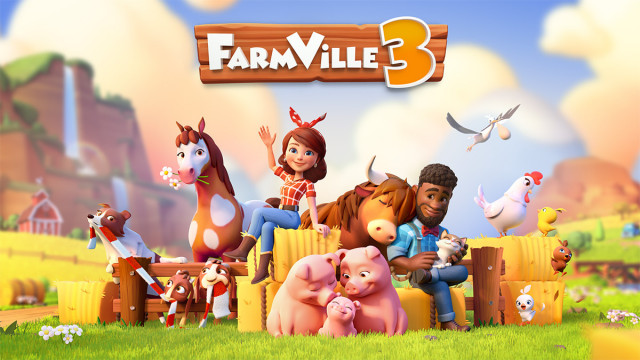 Twelve years - and over 700 million downloads - after the original FarmVille was introduced to the world in 2009, FarmVille 3 is bringing to life a new beautifully crafted world filled with a rich cast of fully animated characters and interactive animals.

Returning to the franchise is the beloved guide Marie, who will welcome back the FarmVille community and greet new players as they build their homesteads and complete challenges. She will be joined by a fresh cast of farmhands with diverse backgrounds and skills who will assist players with new elements in the game, including new customizable farms and animal husbandry.

As players escape into this new world, they can adopt, nurture and raise baby animals from more than 150 breeds - and be rewarded with farm goods, like wool and butter, for their parenting efforts.

“FarmVille 3 immerses players in a visually stunning new FarmVille experience infused with the sense of adventure, social connection and farming spirit that hundreds of millions of fans have come to love,” said Bernard Kim, President of Publishing at Zynga. “We warmly invite a new generation of players to meet the delightful new FarmVille characters and lovable animals who thrive in a gorgeous countryside filled with heart and humor.”

· Variety of animals - Collect, breed and nurture more than 150 breeds of animals, ranging from the mainstay chickens and cows to the exotic tigers and fluffy alpacas
· Diverse farmhands - Meet 30 characters with handy skills - such as baking, fishing, lumberjacking and crafting - that will assist you on your farm-building journey
· A living, breathing world - Control weather patterns with dynamic in-game mechanics to speed up your crop growth, catch more fish or earn more coins
· Customize everything - Dress your farmhands in seasonal outfits such as a pumpkin costume for Halloween or add a personal touch to your farm, animal house or vehicle by picking from a plethora of themed design options such as modern or Victorian decor
· Neighborly social gameplay features - Form your own “co-op” to exchange goods with other players and cooperate to win events and unique decorations

Starting today, players who download the game within the next two weeks will receive a special starter kit with interactive features to help customize their farms, such as decorative elements and the ‘Early Bird’ profile picture.

FarmVille 3 is available now for iOS, Android and Mac M1 as a free download.

Zynga is a global leader in interactive entertainment with a mission to connect the world through games. With massive global reach in more than 175 countries and regions, Zynga has a diverse portfolio of popular game franchises that have been downloaded more than four billion times on mobile including CSR Racing™, Empires & Puzzles™, Golf Rival™, Hair Challenge™, Harry Potter: Puzzles & Spells™, High Heels!™, Merge Dragons!™, Merge Magic!™, Queen Bee™, Toon Blast™, Toy Blast™, Words With Friends™ and Zynga Poker™. With Chartboost, a leading mobile advertising and monetization platform, Zynga is an industry-leading next-generation platform with the ability to optimize programmatic advertising and yields at scale. Founded in 2007, Zynga is headquartered in California with locations in North America, Europe and Asia. For more information, visit www.zynga.com or follow Zynga on Twitter, Instagram, Facebook or the Zynga blog.

Launched on Facebook in 2009, FarmVille spawned a social gaming franchise that has drawn over 700 million installs worldwide across Facebook, web and mobile platforms. Offering players the ability to grow virtual crops and build digital farms together in real-time, FarmVille has entertained its fans in FarmVille 2, FarmVille 2: Country Escape and FarmVille 2: Tropic Escape. FarmVille 3, a game developed by Zynga Helsinki, aims to reinvent the classic farm building genre and showcase the modern mechanics of mobile gaming.

View Korean version of this release

All releases from Zynga Inc.