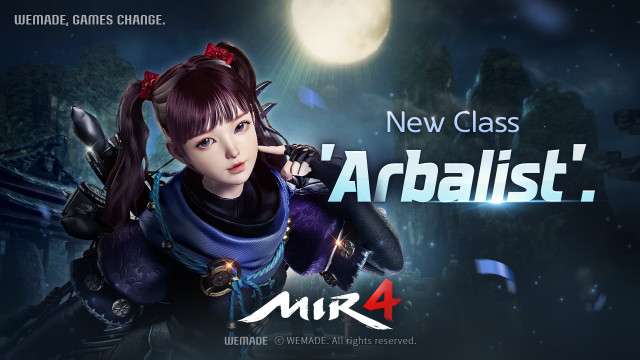 MMORPG MIR4 will experience a large-scale update, including a release of a new class, Arbalist, a crossbow fighter with extremely destructive powers.

SEOUL--(Korea Newswire) November 02, 2021 -- MMORPG MIR4, with over one million concurrent users, will experience a large-scale update on November 2nd. It will include a release of a new class, Arbalist - a crossbow fighter with extremely destructive powers - and the unveiling of the Class Change system. Additional content includes a huge field boss, Crimson Emperor Utukan, and a new growth system - Solitude Training. Furthermore, XDRACO items will be updated and the DSP (DRACO Staking Program) official service will be launched.

Arbalist is the only long-range physical attack type class in MIR4. Arbalist demonstrates extreme destructive power and high levels of survivability using a crossbow combined with martial arts. Groups of monsters can also be hunted efficiently using powerful Area of Effect skills and players can enjoy a new gameplay style with a sniping component that is a new experience for MIR4 users.

The Class Change system can change an existing character’s class while maintaining growth stats. Players can change and choose between the five classes, including the new class, Arbalist, as well as Warrior, Sorcerer, Taoist, and Lancer. The huge field boss, Crimson Emperor Utukan, will also be released. Crimson Emperor Utukan appears every Friday at 11 PM in each region server’s time zone in Crimson Abaddon, located on the fourth floor of Snake Valley. Players who are successful in battle with the field boss will receive 50 treasure chests.

Solitude Training is a growth system that can strengthen the four Blood Vessels; Conception Vessel, Governing Vessel, Thoroughfare Vessel, and Girdle Vessel for players at level 70 and above. Blood Vessels can be strengthened up to Tier 10 by upgrading using energy and materials.

Additionally, XDRACO items marked with the DRACO emblem will be updated and DSP official service will begin. The XDRACO items can be obtained through in-game item drops and DSP and can be traded through EXCHANGE BY DRACO. Players can deposit their DRACO to DSP and acquire XDRACO items through a draw. The probability of winning the item increases as the deposit amounts and period increases, and those who do not win the draw will be refunded 100% of the deposited DRACO.

From my battle, to our war! Visit the official site for more information on the coming updates.