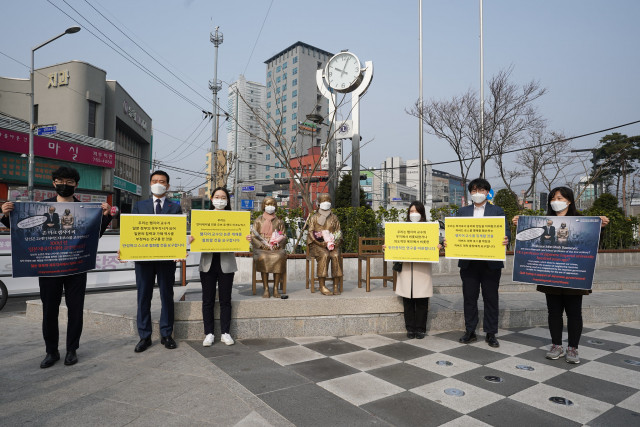 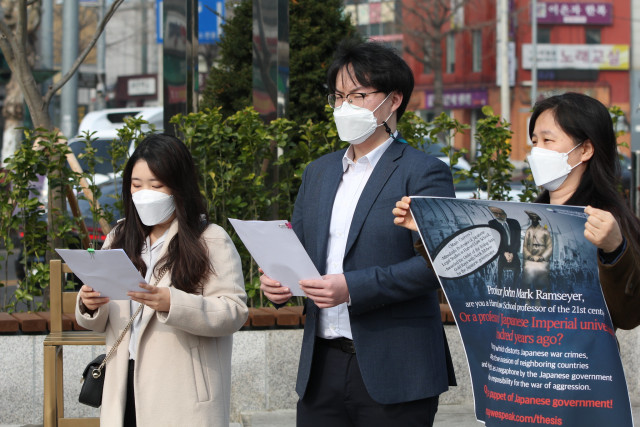 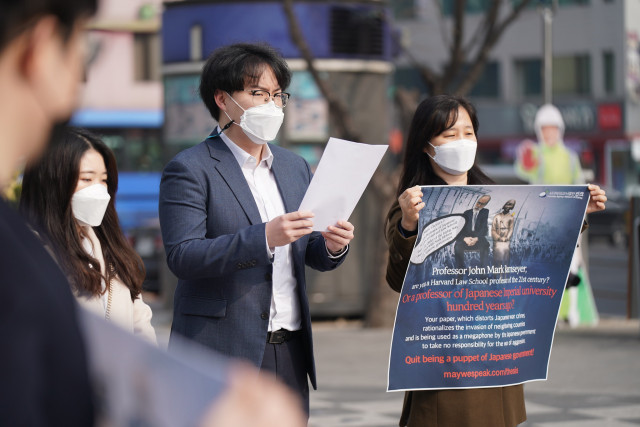 The signs read: J. Mark Ramseyer, are you a 21st century professor at Harvard? Are you a university professor in the Japanese Empire 100 years ago? We criticize anti-human rights research

On 10 am, March 15, VANK members held a picket demonstration in English in front of the “Statue of Peace” installed at Exit 2 of Hansung University Station in Seongbuk-gu, Seoul, Korea, to announce the start of a Global Project publicizing the problems of Professor Ramseyer's thesis.

Below contents include messages that VANK delivers to journalists around the world:

As a journalist, would you accept a thesis from a famous university professor in your country saying that German Nazi war crimes contributed to peace in Europe, or slavery contributed to the development of the American economy?

Something similar to that is happening at Harvard University.

Professor John M. Ramseyer at Harvard Law School is causing a stir as he is going to publish a paper titled “Contracting for sex in the Pacific War” in an international journal in March.

According to an investigation by the Japanese government, the comfort women were deprived of personal freedom, forced to move between bases with the military, were denied the right of sexual self-determination, and were forced to follow the horrible rules. It was also revealed that the sexual and reproductive health of comfort women were treated as possessions to protect soldiers from sexually transmitted diseases.

According to a report by Ms. Gay J. McDougall, Special Rapporteur, United Nations Commission on Human Rights, the treatment of the Comfort Women falls within the ordinary usage of slavery and the slave trade, and they were “deprived of their freedom” and “recruited against their own will.” Moreover, some women were purchased and therefore easily fit the classic mould of slavery.

It is a big problem for a world-renowned university professor to give indulgence to the history of imperial aggression in the name of academic freedom, and to publish a thesis advocating the terrible case of the destruction of women's rights in wartime and to publicize the thesis internationally.

Accordingly, VANK, a private volunteer organization in Korea with 150,000 youths and young adult members, started an online petition at change.org in order for Professor Ramseyer to withdraw his study that claimed “comfort women were prostitutes,” and for the editors of the International Review of Law and Economics, where the thesis will be published, to withdraw the paper.

As of 12 March, 30,000 people from 151 countries around the world have signed the petition. 87% of the signatures are from countries other than Korea, so it is receiving great attention from people all over the world.

This petition starts with the following: “Professor John Mark Ramseyer! Are you a Harvard Law School professor of the 21st century? Or a professor of Japanese Imperial university hundred years ago?”

VANK created Digital Posters embodying Professor Ramseyer sitting on a chair next to the Statue of Peace, which symbolizes the comfort women of the Japanese military and is distributing the Posters to countries through social media.

The poster asks: “Professor John Mark Ramseyer, are you a Harvard Law School professor of the 21st century? Or a professor of Japanese Imperial university hundred years ago?”

Recently, CNN, The Guardian, The Independent, Daily Mail, Associated Press reported on the progress of the incident, triggered by Professor Ramseyer's thesis that claimed comfort women were voluntary prostitutes.

On March 8th, an article titled “Harvard professor sparks outrage” was reported by The Guardian and The Independent and following on 10th, CNN reported with the title “A Harvard professor argued that Korean women forced into sex slavery in WWII did so voluntarily. Now he's facing a backlash.”

In order for Prof. Ramseyer‘s “comfort women” thesis to be withdrawn by IRLE (International Review of Law and Economics), VANK asks the press worldwide to report VANK’s campaign.

VANK (Voluntary Agency Network of Korea) is a cyber diplomatic organization which started in 1999 when a young man exchanged an e-mail with a foreign friend. Now, there are 150,000 VANK members who have the same dream of becoming cyber diplomats to let the world know about Korea and carry the vision of ‘Korea, as being the hub of Asia and gateway to Northeast Asia; along with being a country which shares its dream, friendship and business with all people around the world.’ They spare no effort in realizing this vision by helping the world get to know Korea on the Internet as cyber diplomats.