Isotropic Systems’ prototype multi-beam terminals to be trialed at SES teleport and U.S. Army base 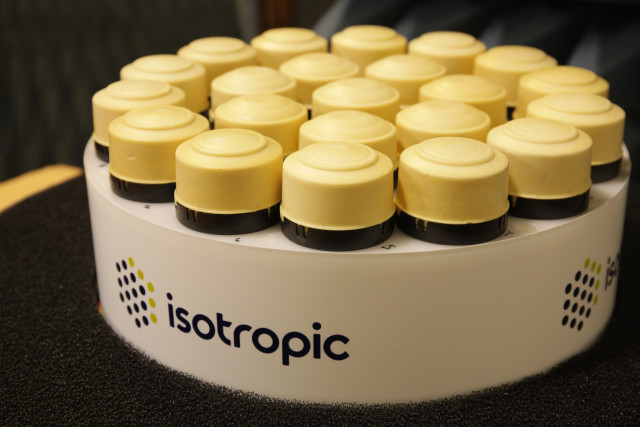 It is the first customer contract between Isotropic Systems and SES Government Solutions and follows on from the significant developmental partnership currently ongoing between the two companies to produce scalable, cost-effective terminals capable of providing government, military, and commercial access to the existing O3b constellation and the groundbreaking O3b mPOWER system set to launch late next year.

The U.S. Air Force and Army, through the innovative Defense Experimentation Using Commercial Space Internet (DEUCSI) program, will review a prototype of Isotropic Systems’ optical beamforming antenna and its ability to connect simultaneously with two satellite constellations at GEO and MEO. The unique multi-beam capability will enable the armed forces to deliver data at the tactical edge by leveraging capacity from multiple commercial satellites and a military satellite over a single antenna platform.

First phase over-the-air (OTA) is scheduled to be completed by early fall, followed by the phase two in early 2021 where the Isotropic Systems optical lens technology will be utilized to demonstrate a two full performance beam connection. One beam will link with an SES geostationary (GEO) satellite, while another full performance optical beam will establish a simultaneous connection with SES’s O3b MEO satellite constellation.

The biggest user of satellite capacity in the world, the U.S. Department of Defense, is exploring new ways to more effectively and efficiently utilize both existing and new capacity coming online in GEO, MEO and LEO orbits. Isotropic Systems’ optical multi-beam terminals bring key advantages to government markets, including the flexibility to meet performance, cost, and power consumption requirements specific to defense.

“As we get ready for the launch of our O3b mPOWER MEO constellation and SES-17 GEO satellite late next year, it is vital that we work with the U.S. Government to better understand their requirements, and to partner with companies like Isotropic Systems to help us meet those needs,” said Pete Hoene, President and CEO of SES Government Solutions. “The Isotropic antenna will deliver high throughput, at low latency over a MEO constellation with simultaneous resilient GEO capacity. This will be a game-changer for the U.S. Army. These collaborative trials with the U.S. Army Research Engineering Team and the Air Force bring commercial ingenuity to the men and women in uniform and the U.S. Government as a whole.”

“Isotropic Systems’ collaborative tests with SES Government Solutions in support of the U.S. military is an important milestone on our roadmap leading to a multi-beam, multi-frequency terminal that allows the government and armed forces to utilize every bit of capacity in the sky,” said Scott Sprague, Chief Commercial Officer of Isotropic Systems. “That is the ultimate goal for the defense market, which is currently grappling with disparate networks to deliver connectivity to the battlespace.”

SES Government Solutions (SES GS) is a wholly-owned subsidiary of global satellite operator SES. SES GS operates under a proxy board allowing them to provide services through contracts with the U.S. Government, including classified work. SES GS is exclusively focused on meeting the satellite communications needs of the U.S. Government. Leveraging more than four decades of experience in the government SATCOM market, SES Government Solutions offers robust and secure end-to-end satellite communications solutions. Further information can be found at www.ses-gs.com

SES has a bold vision to deliver amazing experiences everywhere on earth by distributing the highest quality video content and providing seamless connectivity around the world. As the leader in global content connectivity solutions, SES operates the world’s only multi-orbit constellation of satellites with the unique combination of global coverage and high performance, including the commercially-proven, low-latency Medium Earth Orbit O3b system. By leveraging a vast and intelligent, cloud-enabled network, SES is able to deliver high-quality connectivity solutions anywhere on land, at sea or in the air, and is a trusted partner to the world’s leading telecommunications companies, mobile network operators, governments, connectivity and cloud service providers, broadcasters, video platform operators and content owners. SES’s video network carries over 8,300 channels and has an unparalleled reach of 367 million households, delivering managed media services for both linear and non-linear content. The company is listed on Paris and Luxembourg stock exchanges (Ticker: SESG). Further information is available at: www.ses.com.

Isotropic Systems is developing the world’s first multi-service, high-bandwidth, low power, fully integrated high throughput terminals designed to support the satellite industry to ‘reach beyond’ traditional markets and acquire new customers with a full suite of high throughput services. The company’s team of industry experts and scientists has pioneered several firsts in satellite terminal design resulting in a line of terminals that are customizable to meet the performance, cost and power requirements of countless applications - from the most complex government defense systems and mobile backhaul solutions capable of extending 5G, to next-gen connected experiences aboard commercial airliners, cruise ships, offshore rigs, and even small fishing boats at sea. Isotropic Systems’ Series A funding was led by Boeing to advance space-based connectivity. Further information is available at www.isotropicsystems.com