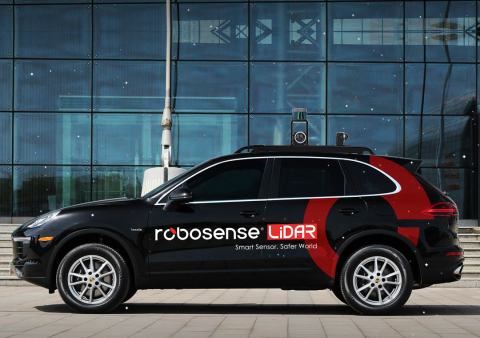 The RoboSense RS-LiDAR-M1 Smart LiDAR is the world’s first MEMS Smart LiDAR Sensor to incorporate sensor hardware, AI perception algorithms, and IC chipsets, transforming conventional LiDAR sensors from an information collector to a complete data analysis and comprehension system, providing essential information for autonomous vehicle decision-making faster than ever before. The RS-LiDAR-M1 is the winner of the CES Innovation Award for two consecutive years in a row, 2019 and 2020.

RoboSense Co-Partner and Vice President of R&D, Dr. Leilei Shinohara, said, “After optimization based on large amounts of data, RoboSense’s algorithm performance and software stability and reliability have proven to have many key advantages. Developed by RoboSense after more than a decade of exhaustive research in perception technology, it has combined the advantages of deep-learning-based AI algorithm with the traditional algorithms to keep functional safety. Since 2017, RoboSense’s algorithms have gained more than 100 global partners for various types of autonomous driving scenario certifications.”

At CES and on the streets of Las Vegas, the RoboSense RS-LiDAR-M1 Smart is demonstrating that it is the world’s first and only Smart LiDAR capable of real road tests on open roads.

During CES 2020, RoboSense128-beams LiDAR RS-Ruby and the short-range Blind Spot LiDAR RS-BPearl also go on public road demo, meanwhile there is also a simultaneous exhibition at RoboSense Booth. This super high-performance 128-beam LiDAR RS-Ruby possesses an ultra-high resolution of 0.1° and the range performance of 200m for a 10% reflectivity target.

The RS-BPearl, the first mass-produced short-range LiDAR for blind-spot detection, reaches the minimum detection range of less than several centimeters, with hemispheric FOV coverage of 90° * 360°, which not only precisely identifies objects around the vehicle’s body, but can also detect the actual height information in particular scenarios, such as with bridge tunnels and culverts.

RoboSense has partnerships with numerous industry leaders who will be announcing partnerships or co-demonstrating with RoboSense at CES, including ON Semiconductor, Xilinx, Horizon, AutoX, and Freetech.

Wade Appelman, Vice President of ISG, SensL Division, ON Semiconductor, said, “The combo of RoboSense LiDAR with the ON Semiconductor RD Series SiPM family of products will perform much better than the older APD technology employed by legacy LiDAR manufacturers using mechanical scanning architectures, further enhancing the performance of the RS-LiDAR-M1 to be one of the best in the automotive LiDAR market.”

All releases from RoboSense