GSMA Intelligence: US and European Consumers Cautious on Move to 5G Devices, China and Korea Set to Lead Early Adoption 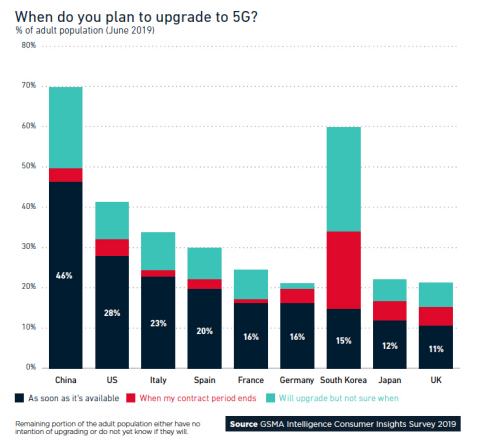 When do you plan to upgrade to 5G?

LAS VEGAS--(Business Wire / Korea Newswire) January 08, 2020 -- The smartphone will remain the dominant consumer device into the new decade, but the arrival of 5G will not guarantee a surge in device upgrades, according to new GSMA Intelligence research. A new report, The Future of Devices, published at the Consumer Electronics Show (CES) 2020 in Las Vegas today, provides a wealth of insight on consumer technology adoption trends over the coming years, including the outlook for smartphones, smart speakers, wearables and other emerging categories.

Based on the results of GSMA Intelligence’s 2019 Consumer Survey, the report found that smartphone ownership among adults in most high- and middle-income countries is at 85-95 per cent. However, only 30-40 per cent of survey respondents in significant markets such as the US, Europe and Australia said the arrival of 5G is likely to result in a smartphone upgrade in the short term. By contrast, markets such as China and South Korea will be early adopters; nearly 50 per cent of Chinese consumers say they will buy a 5G phone as soon as they are available.

“The device ecosystem will be critical in shaping the trajectory of 5G adoption,” said Peter Jarich, Head of GSMA Intelligence. “However, it’s a mistake to believe that consumers in every market will look at 5G upgrades in the same way. Operators and device manufacturers will need to understand consumer demand on a granular level if they hope to make the most of the 5G opportunity.”

Fragmentation and a lack of compatibility between manufacturers hamper the adoption of smart home devices. However, this segment is being boosted by the growing popularity of smart speakers, such as Amazon’s Echo devices, which are increasingly acting as a single control point within the home. Smart speakers were the fastest moving category in the 2019 survey, now owned by 21 per cent of households, up ten percentage points over the previous year. Speakers have become a key battleground in the broader development of AI. Amazon and Google are furthest ahead, but both face the challenge of getting customers to go beyond basic functionality to higher-value tasks such as purchasing goods.

Meanwhile, the adoption rates for fitness trackers and smartwatches also picked up in 2019, and are now owned by 21 per cent and 10 per cent of adults, respectively. Millennials show the most substantial ownership rates of these devices, being more tech-savvy than older generations and also benefitting from an employer or insurance-based subsidies. However, the report notes that connected health devices continue to be sorely underrepresented among older populations. Missing older people is a missed opportunity for tech companies and governments, given that such devices can facilitate remote monitoring for a range of conditions, reducing the volume of in-person consultations and the strain on national healthcare systems.

The 2020 edition of The Future of Devices report is available to accredited members of the press on request. This report is based on GSMA Intelligence’s 2019 Consumer Survey, which surveyed 38,000 respondents across 36 key markets, using a blend of online and face-to-face sampling methodologies.

Our senior analysts will be available on-site for one-to-one media interviews during the week. We can provide expert commentary across a range of industry topics and discuss all the key announcements and developments. Please contact us at: media@gsmaintelligence.com

The GSMA represents the interests of mobile operators worldwide, uniting more than 750 operators and nearly 400 companies in the broader mobile ecosystem, including handset and device makers, software companies, equipment providers and internet companies, as well as organisations in adjacent industry sectors. The GSMA also produces the industry-leading MWC events held annually in Barcelona, Los Angeles and Shanghai, as well as the Mobile 360 Series of regional conferences.

All releases from GSMA