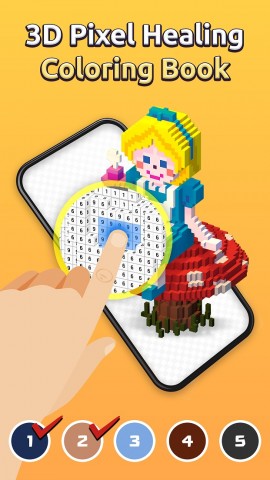 BUFF STUDIO launched My Coloring, a mobile 3D pixel art coloring book game. You can blow your stress away as you paint spaces in the order of numbers on the screen while reading calming messages. Relaxing background music you will listen during game play and its fairytale-like design will give you pleasure.

Its Android and iOS versions were released at the same time so the users can download it for free on Google Play and the Apple App Store.

My Coloring is a game that materializes a 3D pixel art coloring book on mobile devices. It has healing power. You can blow your stress away as you paint spaces in the order of numbers on the screen while reading calming messages. Relaxing background music you will listen during gameplay and its fairytale-like design will give you pleasure and happiness.

The game is easy to play. People of all ages can play it anytime and anyplace. Intuitive coloring games of filling spaces in the order of the numbers on the screen are known for developing users’ coloring skills and concentration. An array of adorable 3D pixel art characters including pretty cats and unicorns appear in the game, stimulating the imagination.

“My Coloring is a healing game that relieves everyday stress and enables users to find simple pleasures of life,” BUFF STUDIO CEO Dohyoung Kim said. “I recommend you try to upgrade the level of difficulty gradually from the stage of easy pixel artworks. I hope you have fun completing dioramas you like and reading stories.”

BUFF STUDIO launched My Oasis in June last year before developing My Coloring. My Oasis, a mobile healing game, got featured in the Apple App Store and Google Play for originality and quality. Games in various genres are under development. Among them are Seven Days, Galaxy Fashion Attack and Theme Solitaire. Seven Days is a mobile adventure game which develops differently depending on user’s choice. Galaxy Fashion Attack is a mobile fashion battle game. Theme Solitaire is a mobile solitaire game where gamers enjoy pleasant time building towers on their own.