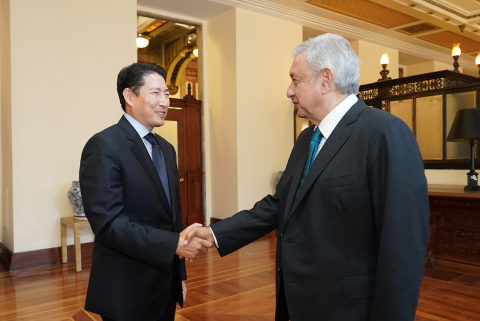 Chairman Cho Hyun-joon of Hyosung Group (left) had a meeting with President Andres Manuel Lopez Obrador of Mexico (right) recently at the Presidential Palace in Mexico City to discuss ways of cooperation between the two parties, including the ‘Rural ATM Project’

Hyosung TNS received an order for full supply of 8,000 units of ATMs (in value of KRW203 billion) needed for the ‘Rural ATM Project’ of Mexico. With successful contract for supplying ATMs for the project led by Chairman Cho Hyun-joon from early stage, Hyosung TNS is expected to increase its share in ATM market in Mexico from the current 2% to 15%, solidifying its position in the market.

The Rural ATM Project, a part of welfare policy for low-income people of Mexico, is designed to establish welfare centers in every rural village and install ATMs of the social welfare bank in villages, allowing low-income people to withdraw government subsidies directly from ATMs.

The government of Mexico has been supporting living of vulnerable people by directly delivering cash to them. But beneficiaries in rural areas actually received 60~70% of government allowances as they have to pay transportation costs to move to receive allowances or pay cash delivery fees. To address this situation, the government is implementing the Rural ATM Project.

Having started his term of office in December last year, President Andrés Manuel López Obrador of Mexico was called the ‘Champion of the Needy Class’ as he implemented policies of improving infrastructure and supporting needy class of people when he served as the mayor of Mexico City in the past. In April this year, President López Obrador clarified the position that he would continue welfare policy for low-income people by announcing the ‘National Development Plan 2019-2024’ that included provision of pension to senior citizens and disabled people, support scholarships for low-income people, and youth support program.

At the meeting with President López Obrador held on November 5, 2019 at the Presidential Palace in Mexico City, Chairman Cho Hyun-joon assured his commitment, saying, “I will exert my utmost effort to contribute to improving quality of life of low-income people and enhancing welfare delivery systems in Mexico by successfully fulfilling the Rural ATM Project.”