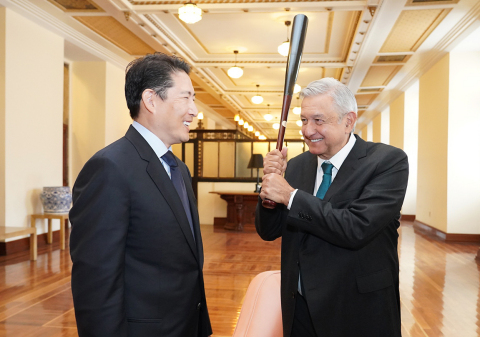 Chairman Cho Hyun-joon of Hyosung Group (left) had a meeting with President Andres Manuel Lopez Obrador of Mexico (right) on November 6, 2019 at the Presidential Palace in Mexico City to discuss ways of cooperation between the two parties, including the ‘Rural ATM Project.’ Chairman Cho gave a baseball bat autographed by Korean Major leaguer Shin-soo Choo of Texas Rangers as a gift to President Obrador, who is known as a big fan of baseball

SEOUL & MEXICO CITY--(Korea Newswire) November 14, 2019 -- Chairman Cho Hyun-joon of Hyosung Group had a meeting with President Andres Manuel Lopez Obrador of Mexico on November 6, 2019 at the Presidential Palace in Mexico City. The meeting was to mark the occasion of receiving an order for fully supplying automated teller machines (ATMs) for the ‘Rural ATM Project’ of the Mexican government by Hyosung TNS, an IT subsidiary of Hyosung Group (KRX:004800).

At the meeting, Chairman Cho presented a baseball bat autographed by top-class Major League Baseball player Choo Shin-soo of the Texas Rangers. For the gift, President Lopez Obrador expressed pleasure by taking a posture of swing with the bat received from Chairman Cho.

Chairman Cho is no less passionate baseball fan than President Lopez Obrador. When he was attending Saint Paul American School in the United States, he played as the captain of baseball team in the school, the first Asian student becoming the captain. After joining Hyosung, he took part in baseball tournaments of in-house baseball teams of Hyosung employees every Sunday, leading his team to win championship for 6th consecutive year.

Perceiving that principle of business management and victory in baseball game corresponds to each other, Chairman Cho asserts the ‘baseball management theory’. As it cumulates strengths and weaknesses of individual players together with their records as data, baseball is an individual sport and at the same time a team sport where victory or defeat is determined on team basis. It is important for individual players to fully play their own roles at each position to achieve good performance, but it is equally important to achieve victory through teamwork. Like in a baseball game that may offer a chance of turning around in the bottom of the 9th inning with 2 outs, Chairman Cho stresses that the company is able to achieve sustainable success when members are committed to challenging tasks without giving up.

The meeting between the two baseball fans who are like-minded over baseball was held in an amicable atmosphere. “Starting with the ‘Rural ATM Project’, the Mexican government and Hyosung are expected to hit a ‘home run’ of achieving successful outcomes through collaboration in various areas, including economic development, social welfare and renewable energy,” said an executive member of Hyosung who attended the meeting.