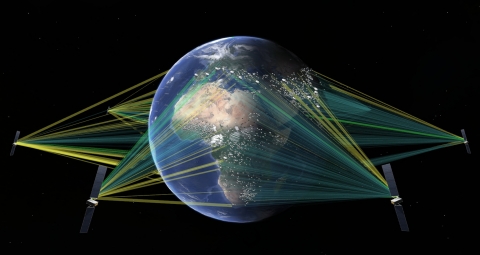 LUXEMBOURG--(Business Wire / Korea Newswire) September 10, 2019 -- SES announced today that it has selected SpaceX as a launch partner to deliver its next-generation Medium Earth Orbit (MEO) satellite constellation into space on board Falcon 9 rockets from Cape Canaveral. The two companies have disrupted the industry in the past when SES became the first to launch a commercial GEO satellite with SpaceX, and later as the first ever payload on a SpaceX reusable rocket. Their next launch, in 2021, will be another one for the records as the revolutionary terabit-scale capabilities of SES’s O3b mPOWER communications system disrupt the industry again.

“Momentum in the O3b mPOWER ecosystem is accelerating quickly as we continue to build the right partnerships to bring this massively innovative communications system to market,” said Steve Collar, CEO of SES. “Working with SpaceX as our launch provider is fitting because in the last seven years we have already jointly made multiple revolutionary industry advancements that make access to space innovation more cost-efficient and unlock new opportunities in critical markets. We are delighted to have SpaceX as partners for our historic O3b mPOWER launch, and together, we will extend high-performance connectivity to all who have limited access to it today.”

“We are pleased that SES has once again selected Falcon 9 to launch their powerful, groundbreaking communications system,” said Gwynne Shotwell, President and Chief Operating Officer at SpaceX. “SES has been an important partner for SpaceX - fully supporting our efforts to make rocket reusability a reality. We are proud to play a part in SES bringing revolutionary connectivity solutions to the market.”

The O3b mPOWER system leverages the proven concept of the current O3b MEO constellation and its success delivering fibre-equivalent connectivity services to customers operating in nearly 50 countries today. The O3b system is the only technically-, operationally- and commercially-proven non-geostationary system for delivering low-latency data communications today.

SES is the world’s leading satellite operator with over 70 satellites in two different orbits, Geostationary Orbit (GEO) and Medium Earth Orbit (MEO). It provides a diverse range of customers with global video distribution and data connectivity services through two business units: SES Video and SES Networks. SES Video reaches over 355 million TV homes, through Direct-to-Home (DTH) platforms and cable, terrestrial, and IPTV networks globally. SES Video delivers a full suite of innovative end-to-end value-added services for both linear and digital distribution, and includes the ASTRA satellite system, which has the largest DTH television reach in Europe. SES Networks provides global managed data services, connecting people in a variety of sectors including telecommunications, maritime, aeronautical, and energy, as well as governments and institutions across the world. The SES Networks portfolio includes GovSat, a 50/50 public-private partnership between SES and the Luxembourg government, and O3b, the only non-geostationary system delivering fibre-like broadband services today. Further information is available at: www.ses.com