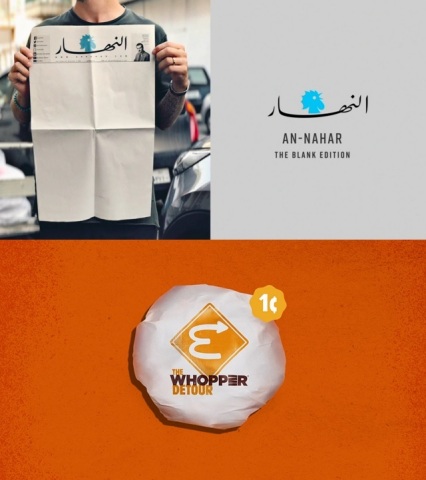 Grand Prix of the Year, which is awarded to two of the best works every year, went to ‘The Blank Edition’ by Impact BBDO from UAE in Public Service Advertising category and ‘The Whopper Detour’ by FCB New York from the United States in Products & Services category.

‘The Blank Edition’ is a campaign that showed the bold and courageous creativity by taking newspapers beyond just an analog media to engage citizens and lead political and social changes in Lebanon.

‘The Whopper Detour’ is a campaign for promoting a newly launched app from Burger King as rival companies‘ applications are ahead in terms of features and market share. The campaign boosted the app into the No. 1 spot on Apple’s App Store within 48 hours after its launching.

The two Grand Prix of the Year winners were each awarded a trophy and a $10,000 prize at the awards ceremony in BEXCO, Busan on August 24.

Meanwhile, Cheil Worldwide Hong Kong won the Agency of the Year and BBDO was awarded the Network of the Year award. The Advertiser of the Year award went to Nike. There were many more recipients of awards ranging from 12 Grand Prix, 60 Gold Awards, 135 Silver Awards to 188 Bronze Awards.

In its 12th installment this year, AD STARS took itself into the next stage of the advertising festival with renowned guests from the global advertising industry.

All releases from AD STARS