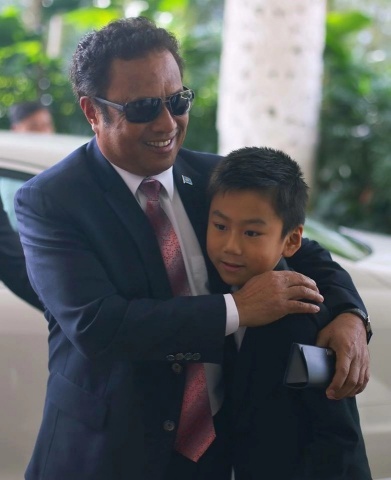 SINGAPORE--(Business Wire / Korea Newswire) March 11, 2019 -- 10-year old International Child Celebrity, Emiliano Cyrus is a Singapore-born Chinese-Portuguese who was recently appointed as the Republic of Palau's Honorary Goodwill Ambassador for Tourism by His Excellency, Tommy Remengesau, President of The Republic of Palau.

Fondly known as “Wonder Boy”, Emiliano is a multitalented individual who is more than an artist, he is also a singer, musical actor, gymnast, model and kart racer who has a successful and vibrant international artist life where he has been invited to perform in China, USA, Singapore, Malaysia, Philippines, Thailand and Palau.

With an outstanding speed track record, he is a well-known professional kart racer who has raced in competitions on international tracks in Sri Lanka, France, Italy, Thailand, Macau, Malaysia and Singapore and was recently spotted and invited for an exclusive interview with Vroom Kart Magazine in Italy, an Italian kart-racing magazine featuring worldwide kart racers, known as the “Speed Superstar”.

“I am very pleased that Emiliano is the ambassador of Palau's Honorary Goodwill Ambassador for Tourism. He is a talented and passionate individual who is actively involved in charity and has a positive and wide-ranging influence internationally. We are very good friends and I am very touched by his love for Palau. He is most deserving of his appointment,” said the President of the Republic of Palau, Tommy Remengesau.

Emiliano who shares a close tie with Tommy Remengesau, President of The Republic of Palau has been also personally invited by Tommy for the inauguration Ceremony of the 10th Constitutional Government, Republic of Palau as well as for President Tommy’s re-election on 19th January 2017. Emiliano has attended a few state events in Palau and has even performed with a local Palauan band for a fundraising Gala Dinner titled “Visionaries- Leading Conservation Forward”. A fundraising gala in support of a conservation programme targeted towards the realization of the coral reef research center in Palau.

When asked what is he going to do next as a Goodwill Ambassador, he said “I am extremely excited that I have decided to do a song for The Republic of Palau, a country that is close to my heart and which I am completely in awe by for its pristine coral reefs and the uniqueness of their non-poisonous jellyfish which lost all their stinging capacities, after the lake got separated from the ocean years ago. One of the unique features of Palau where I am planning to incorporate all these in my song and may more people hear about what this beautiful country has to offer through my song, I always believe in the power of song and its ability to connects people and there’s no better way to express my love for Palau but through a song.”

His recent official appointment alongside with his prominent international celebrity status, representing international brands such as Gap, And1, Mobike, Ofo, Tmall (part of Alibaba Group), etc. No stranger to the media, Emiliano is a media personality who has been interviewed by countless international media in countries such as Singapore, China, Italy, Canada, USA, Malaysia and Thailand. This will allow him to take charge of promoting tourism exchange between Palau and Singapore, and the countries in the Asia Pacific region. He will help to foster relationships bridging the gap between Asia Pacific region and The Republic of Palau.

He has always been involved with charity works globally despite his hectic artist and professional kart racing life. Following the successful launch of the first EP “WonderBoy” in 2017, “Keep the Faith” and the third single “Wonderful”, Emiliano released his EP “The Closest Embrace” recently in late 2018. He was also the youngest invited international child celebrity amongst megastars like Hua Chenyu and Li Yuchun to perform at 2018 Meiling Lunlun Music Festival in China, he gave an amazing performance and left a significant impression in the hearts of the people.

Being an international child celebrity, Emiliano also finds time to balance his life as a full-time student, an artist and a professional kart racer and he looks forward to serve The Republic of Palau as their Goodwill Ambassador for Tourism. In fact, he is thrilled for the upcoming 2020 year where he will be performing at a national state event in Palau which will be attended by presidents all over the world.

He looks forward to contribute in the development of tourism and economic growth, raising environmental awareness and to keep open channels of communication that could serve in the interest of both Palau and Asia Pacific. He will also continue with his charity works for Palau internationally.