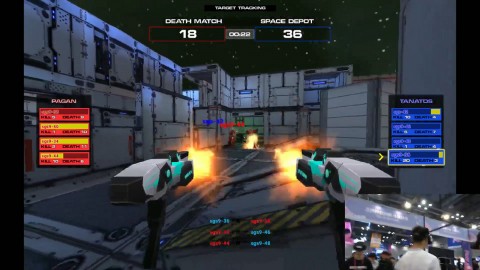 FAKE EYES, a VR game development company in Korea, released VR FPS game COLONICLE. Colonicle is a mobile VR FPS game which up to eight players fight against each other through wireless internet with Gear VR, Cardboard VR and Oculus Go.

Colonicle is a mobile VR FPS game which up to eight players fight against each other through wireless internet with Gear VR, Cardboard VR and Oculus Go.

Not only FPS game enthusiasts but also gamers who want to enjoy the great sense of immersion in virtual reality, are enjoying the game.

‘One on one’ to ‘Four on four’, a total of 8 people can play various missions. And maps which include ‘Death Match’ and ‘Occupation Match’ help playing the game. Also build strategies with the team to kill the enemies with more than 10 kinds of weapons.

The app is available for free on the Oculus Store, Google play store and Amazon app store.

FAKE EYES CO., LTD is preparing for various social content updates such as voice chat function, clan war, and rankings. On top of these, they are planning to host mobile VR E-sports competition in the future.

If you are not playing VR games due to high cost and hassles, ‘Colonicle’ would be the choice for you.
To download or learn more about Colonicle, please visit: http://www.colonicle.com/