BOF 2018 Brings Together Biggest K-Pop Stars Including EXO, Wanna One, Seventeen in Busan for Opening Show on Oct. 20

Enjoy K-pop performances and Experience K-content for 9 days until Oct. 28 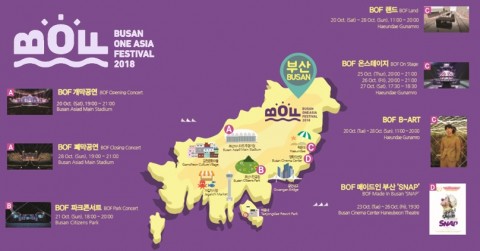 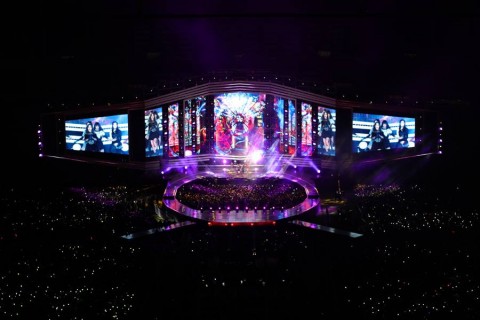 2018 Busan One Asia Festival (BOF 2018) started a nine-day run with a spectacular opening performance on Oct. 20.

The performance titled “Hi Five Busan, BOF” was to kick off at 7 pm on Saturday, Oct. 20 in Busan Asiad Main Stadium, introducing K-content which express Busan.

It began with a joint show by ‘Celeb Five,’ which is a group of five popular female comedians, and about 100 Busan citizens. Following performances were introduced in relay by Busan-born model and actor Bae Jung-nam, artist Kim Chung-jae who’s in charge of directing the design of BOF 2018 BI and posters, and singers slated to come to the stage.

The audience were thrilled at dazzling gigs by leading K-pop musicians -- EXO, Wanna One, SEVENTEEN, NCT 127, Celeb Five, Mamamoo, EXID and GFriend -- and rising “idol” singers such as The Boyz, A.C.E and (G)I-dle. Afterwards, the opening performance is telecast again.

On the following day, Oct. 21, ‘BOF Park Concert’ delighted your ears and eyes with various genres of music favored by every generation. The picnic concert opened at 6 pm on a square of grass at Busan Citizens Park. Busan City Choir performed in collaboration with Kingston Rudieska, a Korean ska band. The lineup includes K.will, Chung Ha, NU’EST W (a four-man band), Favorite (a six-girl group), and Cherry On Top (a four-girl group).

“We will bring together Korea’s truly best Hallyu artists in Busan for the opening performance. We expect the BOF to help spread the brand value of Busan as a city with Asia’s most abundant Hallyu content,” the BOF Project Group said, “We have prepared a various array of programs for everyone to experience K-content, not to mention enjoying K-pop. We hope you will like them.”

All releases from Busan One Asia Festival