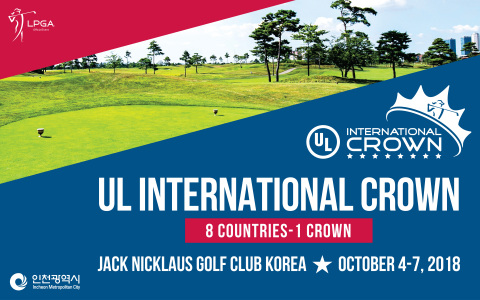 2018 UL International Crown will be held October 4-7 at Jack Nicklaus Golf Club Korea in Songdo, Incheon Metropolitan City. Incheon Metropolitan City is not sparing any effort to support the event as an Ambassador Partner. The most high-profile biennial golf tournament on the LPGA Tour, the third UL International Crown to take place with the second held in Chicago in 2016. 32 players from the eight countries will compete in the four-day match-play event for the Crown.

The most high-profile biennial golf tournament on the LPGA Tour, a first-of-its-kind team match-play competition featuring the best women golfers from the top eight countries around the world, is being played outside the United States for the first time since the first UL International Crown was staged in Baltimore in 2014.

This is the third UL International Crown to take place with the second held in Chicago in 2016.

32 players from the eight countries, confirmed via the Rolex Women’s World Golf Rankings, will compete in the four-day match-play event for a total purse of $1.6 million. The “Crown,” otherwise known as the title of best golfing nation in the world, will be awarded to the winning country after the final round.

Team Korea earned the No. 1 seeding while defending champions, Team USA, were seeded second. The other six teams competing, in order of seeding, are Japan, England, Australia, Thailand, Sweden and Chinese Taipei.

The highest-ranked Team Korea will be spearheaded by major champions: Sung Hyun Park, So Yeon Ryu, In-Kyung Kim and In-ji Jeon. With the first UL International Crown won by Spain and the second by USA, many golf fans are keen to know whether top seed Team Korea will capture the Crown.

Incheon Metropolitan City is not sparing any effort to support the event as an Ambassador Partner. Incheon has organized nine support teams comprised of experts in public relations, sanitation, tourism, firefighting and others to better serve local and foreign golf enthusiasts who will visit to see the upcoming golf event.

“This international competition is expected to attract the attention of golf fans across the globe because it will be played in Incheon, an emerging business hub in Northeast Asia,” said Incheon Mayor Nam-chun Park. “We will try to take this opportunity to make Incheon more familiar to the world as a city that is capable of hosting more international events.”

All releases from Incheon Metropolitan City