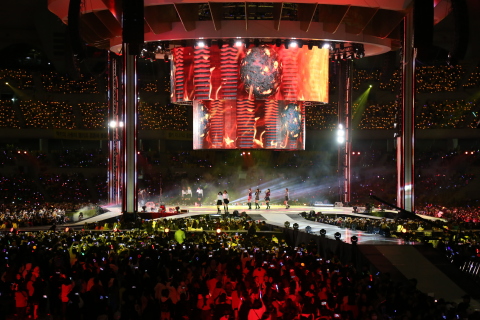 The Busan One Asia Festival (BOF) will be held from October 20th to 28th in Busan. BOF will open with a spectacular BOF Opening Performance on October 20th and end with the BOF Closing Performance on the 28th, both will be at the Busan Asiad Main Stadium. During the opening event, EXO, Wanna One, SEVENTEEN, NCT 127, Mamamoo, EXID, GFriend, and Celeb Five will show up and present wonderful K-POP performances. The closing event will have a colorful finale with performances by Red Velvet, NCT Dream, Favorite, Dynamic Duo and Rhythm Power. The photo is 2017 Busan One Asia Festival BOF Opening Performance

During the opening event, EXO, Wanna One, SEVENTEEN, NCT 127, Mamamoo, EXID, GFriend, and Celeb Five will show up and present wonderful K-POP performances. The closing event will have a colorful finale with performances by Red Velvet, NCT Dream, Favorite, Dynamic Duo and Rhythm Power.

‘BOF Park Concert’, will be held at Busan Citizens Park on the 21st, and present families and people of all generations with a variety of musical performance genres, from ballads to trot music, amid beautiful nature and a lineup that includes K.Will and Chungha.

‘BOF Land’ will be installed at Gunam-ro near Haeundae Beach in Busan to accommodate various programs, including the performances of ‘BOF On-stage,’ featuring famous K-POP, indie rock, and hip-hop stars, in order to bring joy to citizens and tourists throughout the nine days of the festival.

Through the ‘BOF B-Art’, participants can experience the artwork of Korean artists. In the BOF Land, visitors will be able to meet artists, including Kim Choong-jae, who designed the BOF poster this year and Sambypen, who will demonstrate his graffiti work, as well as Kian84, a webtoon artist who is known for his appearances on the MBC television entertainment program, "I Live Alone.”

‘Made in Busan’ program will introduce Busan’s great cultural content to the world. Within the Local Production section, the magic performance ‘SNAP’ from Grue Jam Production, which was chosen as one of the top 6 among 3,329 performances at the 2016 Edinburgh Fringe Festival will be on stage at the Busan Cinema Center. Various performances, exhibitions and experience programs chosen in the Art & Culture section will also be shown across Busan.

The Busan One Asia Festival 2018 will showcase the essence of the Korean Wave, or Korean culture, starting in Busan, which includes K-Music, K-Beauty and K-Fashion to enthrall the hearts of tourists visiting Busan.

All releases from Busan Metropolitan City