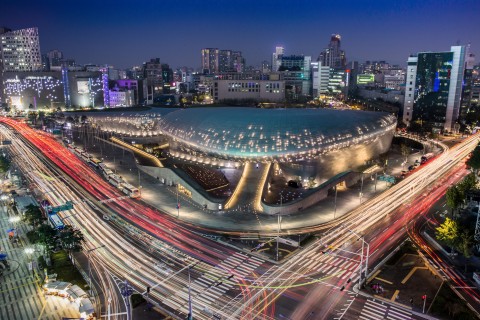 The Seoul Design Foundation announced that it will participate in ‘Maison&Objet’ in Paris Nord Villepinte, France, from September 7 to 11, 2018. It has participated in the exhibition since 2010.

SEOUL--(Korea Newswire) September 08, 2018 -- The Seoul Design Foundation announced that it will participate in ‘Maison&Objet’ in Paris Nord Villepinte, France, from September 7 to 11, 2018. It has participated in the exhibition since 2010.

“DDP STORE” in the venue of the exhibition will showcase a wide variety of Korean handicraft such as home interior accessories, stationary and living ware. They were made by five Korean design companies -- STUDIO IGI, Choisy, Lightree, SPEXTRUM and DREAMSKY -- and by craftspeople of the Mapo Bukchon Craft Arts Center funded by the Seoul Design Foundation.

Dongdaemun Design Plaza (DDP) is the world‘s largest atypical architecture built in Seoul as a base for the country’s “creative industry” which will lead the development of the capital city of Korea. The landmark was designed by world-renowned architect, Zaha Hadid. Under the slogan of “Dream, Create and Enjoy at DDP,” the plaza searches for new ideas, various talents and a better life. It also promotes creative industry, fosters talent and offers open workspace for citizens.

“DDP STORE” is a design shop run by the Seoul Design Foundation to make and sell arts and crafts reflecting the identity of DDP. You can see the latest trends of Seoul design in DDP STORE.

“Seoul Design Party” will be held from 2 p.m. to 4 p.m. on September 9 in “DDP STORE” in Hall 2 for Smart Gift, one of the exhibition sectors. Everyone is invited to the party. You can get the feel of Seoul design as well as networking with Seoul designers. Anyone interested in Seoul design trends and policies will have meaningful time.

The Seoul Design Foundation has won orders and provided counseling services steadily owing to positive responses from buyers since it debuted in ‘Maison&Objet’ in 2010. The amount of orders and counseling services so far exceed KRW 5 billion. This was possible due to two factors: effective management in product development, distribution and marketing to help designers who participated in the exhibition and strategic display of products that buyers preferred.

“I hope this exhibition will serve as a chance to let the world know Seoul design which is at the center of Korea’s creative industry,” an official of the fund said.

All releases from Seoul Design Foundation