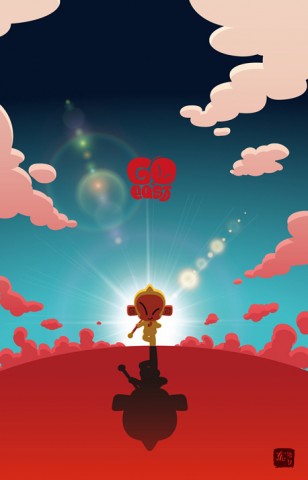 COSCOI announced that two educational apps for children featuring cute characters of ‘Go East’ have been downloaded about 40,000 times in a month after being released. They made it big in Southeast Asia, with 96 percent of users concentrated on Vietnam, Indonesia, Thailand and Malaysia. Vietnam and Indonesia take up 80 percent of total sales.

COSCOI also signed a contract with Zalo, a famous messenger app of Vietnam, to supply ‘Go East’ emoticons soon. It is in consultation with other Southeast Asian companies over license for ‘Go East’ and other emoticons.

‘Go East’ is an animation content adapted from ‘Journey to the West,’ a 15th century classical Chinese novel which deals with the adventures and exploits of a monkey named Sun Wukong. ‘Go East’ has a new plot which develops from an imaginative question, “What if Sun Wukong has a younger brother?” It is a road movie showing Wukong’s troublemaking brother ‘Banamong’ tastes a variety of foods as he travels east. Its popularity is attributable to a striking twist to the widely known tale and the addition of two popular topics, foods and travel.

Characters in the story are so strong and cute that they received positive responses in global character, animation and IP exhibitions, including the LIMA 2018 in Las Vegas, USA, the Beijing International Film Festival in Beijing, China and the Mifa 2018 in Annecy, France.

COSCOI has developed Mobile App Service (MAS), a content management platform to launch and manage apps for an effective distribution and utilization of ‘Go East,’ its intellectual property.

“I expect the apps to succeed in the global market without difficulty thanks to their strong showing in Southeast Asia,” COSCOI Vice President Ja Keun Kim said, “We plan to release 11 more educational apps this year.”