Holding a press conference on August 23, the DMZ International Documentary Film Festival started preparation for opening the festival.
It unveiled 114 documentary films from 42 countries for screening including the opening film ‘Old Marine Boy’.
It is foreseen to make second leap forward as a representative documentary film festival in Asia. 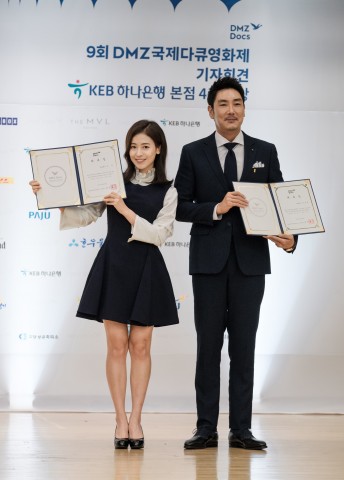 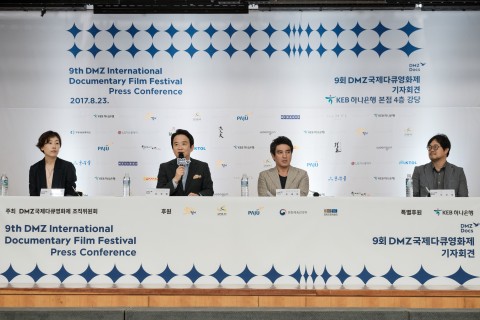 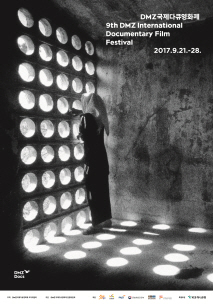 SEOUL--(Korea Newswire) August 23, 2017 -- The DMZ International Documentary Film Festival (Chairman of Organizing Committee: Nam Kyung-pil; Chairman of Executive Committee: Cho Jae-hyun) announced the opening film and festival program of its 9th Festival in a news conference held on Wednesday, August 23, 2017 at 11:00 a.m. at the head office of KEB Hana Bank in Eulji-ro, Seoul. It also named an actor and an actress as honorary ambassadors.

“Having watched growth of the DMZ Docs over the past 8 years, I found the strength of camera that embraces the society through documentary films, which listen to voices of minorities and socially vulnerable people,” said Chairman Nam Kyung-pil of Organizing Committee of the Festival. “As the chairman of Organizing Committee, I will be a staunch supporter of their voices so as to be continuously delivered to the society.”

“Over past years, we have been committed to establishing a robust film festival for audience and producers of documentary films. We have prepared a variety of events and promotional activities as well as colorful programs for the festival this year to get further closer to audience,” added Chairman Cho Jae-hyun of Executive Committee. “We will also be at the forefront of providing stabilized production environment to documentary film directors.”

Documentaries in the 9th DMZ Docs are notable for diversity in their themes and innovation in forms. The festival this year will provide chances of making in-depth introspection on production sites of documentaries. It will also diagnose production environment of independent producers and creators while discussing environment and ecosystem of fair broadcasting to envision the future of documentary films in Korea. Through a variety of programs designed to approach closer to citizens, the DMZ Docs this year aims to popularize documentary films.

‘Old Marine Boy’, a new documentary film of director Jin Mo-young who directed ‘My Love, Don’t Cross That River’ which broke the documentary film box-office record in Korea, is chosen as an opening film. Featuring a diver in Goseong, Gangwon-do who defected from North Korea, ‘Old Marine Boy’ depicts processes of adapting to South Korean society to survive with his family.

New documentary films produced by notable directors attract keen attention. Three years after he took part in the 6th DMZ Docs in 2014 with the opening film ‘A Crybaby Boxing Club’, director Lee Il-ha will present a new film ‘Counters’ to audience this year. It pleasantly depicts Takahasi, a one-time Yakuza member, and others who stand against anti-Korean power in Japan. It is chosen as the only Korean film to be screened in the international competition section as it is highly evaluated for unique characters, skillful development of scenes and sensual editing that can be rarely found among Korean documentary films.

Director Kim Hyoung-ju who won the audience award in the 5th DMZ Docs with ‘The Basement Satellite’ will introduce ‘Roadshow’, a record of journey in Rwanda filmed by 4 photographers, while director Kim Mi-re who won the best Korean documentary award for ‘Sanda’ in the same festival will show ‘Wolf Letter’ that features Korean people who armed and fought against the Japanese imperialism in the 1970s.

Director Kim Dong-won who wrote a new history of Korean documentary film with ‘Sanggye-Dong Olympic’ in 1988 will take part in the festival this year with his new film “Jung Il-Woo, My Friend’, and will screen ‘The Six Day Fight in Myong Dong Cathedral’, which was produced in 1997, in the specially planned section. And director Im Heung-soon, who first received the Silver Lion Award in Venice Biennale as a Korean for ‘Factory Complex’, will introduce a new work ‘Ryeohang’.

▲ Far and near North Korea; introspection on territorial division and dispersed families seen through documentaries

The ‘DMZ vision’ is a section unique in the DMZ International Documentary Film Festival that attempts to reach the truth through cameras closely focused on the demilitarized zone (DMZ) and true situation that deliver pains of war and division in the most vivid way.

Through 7 documentary films, the ‘DMZ vision’ section will share with the audience the vision of curing injuries of colonialism, division and dispersion, and of realizing unification. Films to be screened in this section include ‘Old Marine Boy’, the opening film, ‘Ryeohang’ by director Im Heung-soon that depicts a defected North Korean woman who settled in South Korea, ‘Liberation Day’ that features scenes of performance in Pyeongyang by a Yugoslavia-native Slovenian rock band, and ‘My Brothers and Sisters in the North’ by director Cho Sung-Hyung that was highly praised by German media when it was screened across that country last year.

‘Square’ and ‘mise-en-scene’ will be highlighted in the specially planned film showing this year. ‘Special Focus: Sq, Sing Out Songs’ raises voice for a new paradigm of democracy in Korea by depicting the fever of candle lights that heated up Korea in 2016. Above all, four Korean films attract attention. As documentaries of sit-down strikes at Myong-dong Cathedral and the case of moving illegal ballot boxes from Guro-gu district office in 1987, respectively, ‘The Six Day Fight in Myong Dong Cathedral’ by director Kim Dong-won and ‘Words Kept In A Stone’ by director Naru help one consider limitation and possibility of resistance in June 1987. Also noticeable is the omnibus project of ‘Candle in the Wave’ and ‘All Day Candles’ that recorded vivid scenes of candle light history started in plaza in November 2016.

Since its inception in 2013, the support for production of films by the DMZ Docs is bringing meaningful results year after year. ‘My Love, Don’t Cross That River’ which broke the documentary film box-office record in Korea and ‘Becoming Who I Was’, an award-winning film in Berlin International Film Festival, were explored through support of production.

A total of 10 documentary films produced by support of the DMZ Docs will be screened in the festival this year. They include ‘After Chosun’ by director Mun Jeong-hyun that raises a question on the ‘nation’ through history and present records of Korean residents in Japan, ‘To Kill Alice’ by director Kim Sang-kyu that deals with the case of Shin Eun-mi, a Korean-American, and ‘Bloody Phanek’ by director Sonia Nepram that searches real meaning of phanek, unique traditional clothe of Manipuri women in India.

Death of producers Park Hwan-sung and Kim Gwang-il and independent documentary director Park Jong-phil in July this year brought great shock and sorrow to film community in Korea. ‘Special Screening In Memory of Director Park Hwan-Sung’ and policy discussion will be held in order to cherish the memory and remember these artists. Discussions will be made on subjects of production environment of creators, fair broadcasting ecosystem, and social safety net and right of health of independent documentary film producers. The discussion is expected to work out policy alternatives and specific indicator of survey on situation of independent documentary film producers and directors. As seen in the ‘Young Goose Award’ newly added this year, DMZ Docs will continuously pay attention to exploring and supporting young directors who have new vision and spirit.

▲ ‘Documentary into the People’

Under the slogan of ‘Documentary into the People’, the 9th DMZ International Documentary Film Festival will operate a variety of programs to allow citizens to enjoy documentary films throughout the year.

The ‘Docs Family’ section that can be enjoyed together by all generations is recommended for watching movies by all family members. The ‘Docs Choice’ section being commented by Jay Sohn, a culture critic, Won Jong-woo, representative of Science and People, and writer Eun Yu is ideal for beginners of documentary films.

The ‘Life Story Written with Video’ for senior citizens inaugurated in this year is a project of converting oral history of individuals into documentary films. Currently, five elderly citizens are participating in this project, and interim outcomes of the project will be unveiled at a special forum during the festival.

In addition, ‘DMZ Cinema’, a screening hall that provides diverse documentary films at desired time zone, is installed at the secretariat of DMZ International Documentary Film Festival. It is designed to enjoy attraction of documentary films through VJ potcast ‘Dynamite Zone’ that exposes hot social issues together with Actor Nam Tae-woo who is popular as a host of potcast and web magazine ‘DMZ Scope’ that delivers novel feature of documentary films.

Actor Cho Jin-woong and Actress Ji-woo are designated as honorary ambassadors for the 9th DMZ Docs. Having recently taken part in the ‘Program of G-Cinema for Diversity Film of Gyeonggi-do’, a project of supporting diversity films, these artists are continuously conducting meaningful activities helpful for development of film community in Korea while increasing chances of getting access to diverse films for the general public.

After the press conference, information on 114 documentary films for screening and major events was released on the website of DMZ International Documentary Film Festival (www.dmzdocs.com). The 9th DMZ International Documentary Film Festival, which began countdown starting with announcement of films to be screened, will be held for 8 days from September 21 to 28, 2017 in Goyang (Mega Box Baekseok), Paju (Mega Box in Paju Book City), Gimpo (Gimpo Art Hall), and Yeoncheon (Yeoncheon Sureul Art Hall). Reservation for documentary films to be screened will start on September 11, 2017.