C-Festival 2017, the Largest Urban Cultural Festival in Korea, Opens May 3

Urban Culture Playground Opens in Gangnam through May long weekend 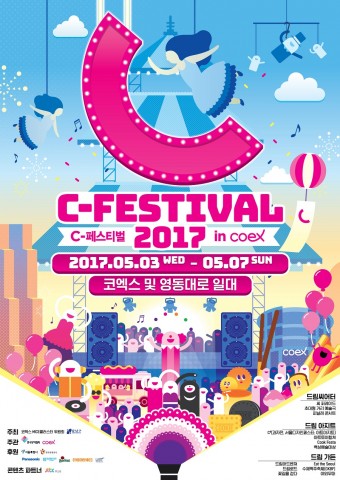 C-Festival 2017, kicks off on May 3rd and runs through May 7th at COEX and Yeongdong-daero area in Seoul. Various performances, exhibitions and activities will be held in the center of Gangnam, Seoul. The event is celebrating its third edition this year and will be hosted by the Korea International Trade Association (KITA) and Gangnam-gu, and supervised by the Committee of the COEX MICE Cluster and COEX.

SEOUL--(Korea Newswire) April 27, 2017 -- Korea’s largest urban cultural event, C-Festival 2017, kicks off on May 3rd and runs through May 7th at COEX and Yeongdong-daero area in Seoul.

The event is celebrating its third edition this year and will be hosted by the Korea International Trade Association (KITA) and Gangnam-gu, and supervised by the Committee of the COEX MICE Cluster and COEX. The festival will be held on the first major long weekend of 2017 in Korea. More than two million people are estimated to visit the festival.

The concept of C-Festival 2017 is an ‘Urban Culture Playground’ and includes various performances, exhibitions and activities in the center of Gangnam, Seoul. With three dream-themed zones, the Dream Theatre, Dream Garden and Dream Agit, guests will find plenty of special moments to share with family and friends.

On May 6th the Dream Theater zone will open up Yeongdong-daero for a day of fun events including a parade and performances capped off with a climactic K-Pop concert.

The French street theatre group, Transe Express, will perform a street art show at the main parade, the highlight of C-Festival 2017. Following the street art show, visitors can watch a fireworks display and finale concert with popular Korean musicians.

C-Festival 2017 also has a number of great cultural events for all families, friends, couples, tourists and domestic visitors alike.

On May 3rd JTBC will hold the 53rd BaekSang Arts Awards at the opening ceremonies of C-Festival 2017. From May 3rd to 7th, the C-Festival Media Art Show will display a large media facade on the surface of the COEX Trade Center building.

The Dream Garden zone will be located at the outdoor square of COEX. The popular foodie Facebook community, What Shall We Eat will collaborate with Eat the Seoul, an event featuring 26 famous restaurants in Seoul which will be serving food from April 28th. Following this program, the Great Korean Beer Festival (GKBF) will open at G20 Square and SM TOWN square with a range of delicious snacks and drinks.

The Dream Garden zone also includes the first floor lobby of COEX which will host free indoor activity programs including the Gymboree Playground, Play Musical of Playsongs and Dream Road. The South Gate Lobby Square will also have a flower art road.

All releases from COEX