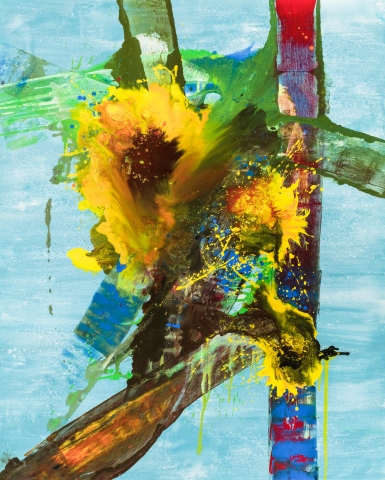 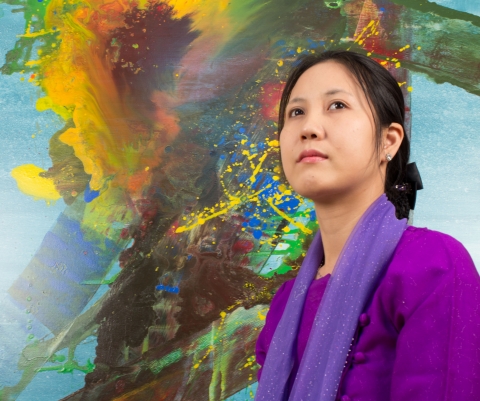 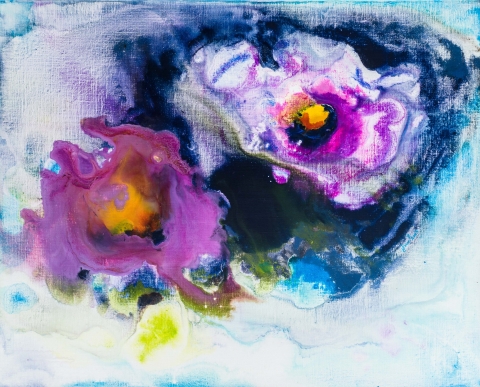 SEOUL--(Korea Newswire) March 23, 2015 -- A solo exhibition by Shwe Sin Aye(So Hee) who is known as ‘a painter who shares happiness’ will be held at ‘Leader’s Gallery Soo’ in Insadong from March 25th to April 7th.

Shwe Sin Aye who is currently enrolled in the ph.D program of Korean painting major at Sookmyung woman’s university is about to be “the first female doctor of fine art in Myanmar” after this exhibition. Shwe Sin Aye attempts to share happiness with many people through her works that convey free, happy emotions. Viewers may feel vitality through her vivid works.

There are no specific forms in Shwe Sin Aye’s works. She does not delineate a particular subject matter but represents blissful emotions that she captures in fleeting moments. Her works, which are represented throughout forms of flowers to deliver happiness, illustrate truths of the felt moments.

Yoon Seop Kim who is an art critic and the head of The Korea Arts Managements Institute speaks about Shwe Sin Aye’s works by saying, “Shwe Sin Aye’s works whimsically body out ‘her feeling toward flowers’ that are asleep in her unconsciousness. Sometimes, she would paint close-ups of flowers to make viewers sense afterimages of flowers while some other times, she would add strong, big, wide bands around the afterimages. Her work shows ‘a desire toward freedom and happiness’ which is not calculated through reasons. Rather, she automatically represents her emotions that she feels.”

He then argues in his introduction of Shwe Sin Aye’s show saying, “a good work of art should be able to deliver the artist’s emotion. In this sense, Shwe Sin Aye’s works make viewers feel the passion she has.”

The motif of Shwe Sin Aye’s work is flower. She tries to “paint blissful emotions of her mind instead of making drawings on canvas.” She says that she would “dance or sing while painting in order to represent the resonance in her mind.”

Shwe Sin Aye describes her work as “Soo Saek Wha” (which refers to water-color-painting in Korean. Note that it is different from watercolor painting). For Soo Saek Wha, one should spray water on canvas and wet it then drop paints on it. When the water evaporates, only colors would remain on the surface. “The balance of colors included in the water is so beautiful so that I can enjoy the painting process. I can see colors naturally balance out as the water evaporates,” She says.

Recently, a number of people paint Mandala figures for meditation while Shew Sin Aye enjoys her painting process working off the happy feelings.

Shwe Sin Aye wants to meet with viewers through her works that represent honest, blissful feelings rather than to introduce a complicate theory. She feels happy when she works on her paintings and therefore, she wants to share the feeling with people.

Shwe Sin Aye’s show may look different from what we, viewers, expect to see in the usual art gallery shows. She has exhibited five times now both in Myanmar and Korea. And each time, she had conversations with viewers and took pictures together with them. She did this to be able to share happiness with more people by letting them enjoy her paintings without feeling pressure.

Introduction of the artist ∥ Shwe Sin Aye(So Hee) (1980~ ) was graduated from National University of Arts and Culture in Myanmar majoring in fine art and the graduate school of Sookmyung woman’s university, Korea. Currently, she is enrolled in the ph.D course in Korean painting in the same school. She paints happy feelings of her inner mind referencing from forms of flowers and presents Inner Happiness and Flowers series to share happiness with viewers. She had five solo exhibitions both in Myanmar and Korea and was included in many group exhibitions and art fairs in Korea, Turkey, and Italia.