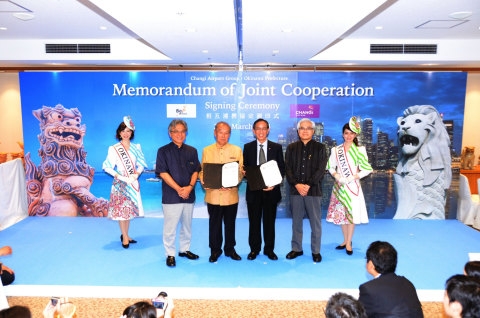 NAHA, JAPAN--(Business Wire / Korea Newswire) March 26, 2014 -- The Governor of Okinawa Prefectural Government, Mr. Hirokazu Nakaima and Changi Airport Senior Advisor, Mr. Wong Woon Liong, today signed a memorandum of understanding (MOU) to strengthen the aviation network between Okinawa and Singapore. Under the MOU, Okinawa and the Changi Airport have agreed to work closely to promote tourism and trade exchange between Okinawa, Singapore, South East Asia and beyond markets including India and Australia.

Some initiatives in the pipeline will include working with airlines to create new routes from the two cities and promoting direct flights to increase the numbers of visitors from Singapore and other regions.

Regional promotion to 1.2 billion residents of South East and South Asian countries including Malaysia, Indonesia, Australia, India and other regions will aim to promote Singapore as a travel hub to Okinawa.

Trade will also receive a boost with Okinawa aiming to work with enterprises with access to international air cargo logistics, to grow distribution channels for Okinawan products to Singapore and neighboring markets. Okinawa is a robust exporter of healthy and high quality food including fresh produce, brown sugar lump, salt and sweet goods. These are well reputed among overseas countries.

“It is a great honor for me to be here for the signing of the MOU between Singapore Changi Airport and Okinawa Prefecture. This MOU is aimed at enhancing direct air connectivity between the two cities. Changi Airport is keen to establish a direct link to Okinawa. The prefecture shares the common interest to promote tourism, trade and transport people from one destination to another,” said Mr. Wong Woon Liong.

“With this non-stop flight inauguration, it will decrease flight time to Okinawa, and provide greater comfort and convenience to business and leisure travelers. To start with, we will work together with key travel agencies to launch charter flights between Singapore and Okinawa. This will create and further develop the Singapore-Okinawa market for the first scheduled direct flights. We are also planning to conduct marketing promotion activities together,” he added.

“It is a great honor for us to have a signing ceremony with the presence of Mr. Wong Woon Liong, as a representative from Changi Airport, and many other respectful guests around the world. As everybody knows, Changi Airport is one of the world’s leading airports and a hub for 1.2 billion residents in the South East and South Asian region. Through this relationship, we expect our prefecture’s aviation network to be further strengthened to increase tourism and air cargo,” said Governor Hirokazu Nakaima.

“We also expect that Okinawa will be widely known as a new, attractive destination in Japan through our ongoing and future promotions in Singapore and many other regions,” he added.

The signing ceremony was held today at the international terminal of Naha Airport.

Changi Airport (www.changiairport.com) is the world’s most awarded airport with more than 450 accolades received since it opened in 1981. To serve passengers and visitors from the world over, there are over 350 retail stores and 120 F&B outlets across the airport's three terminals. Changi handled more than 53 million passenger movements in 2013, an annual record. Today, it serves more than 100 airlines flying to 280 cities in about 60 countries and territories worldwide. A flight takes off or lands at Changi roughly once every 90 seconds.

Okinawa Prefecture, located in the southernmost part of Japan, consists of more than 160 large or small beautiful islands, scattered in the vast ocean. Okinawa, with its warm climate in the subtropical-oceanic zone, has a diversity of ecosystems and is a habitat for a variety of animals and plants including beautiful corals. Since Okinawa has a long history with the Asian continent for overseas commerce, a unique history and culture has developed. Such uniqueness is seen in the archaeological digs, architecture, arts and crafts, entertainment, cuisine and customs.