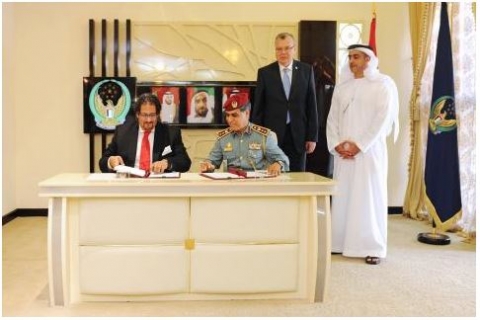 Based on the above mentioned memorandum, UNODC certified the UAE, represented by the Forensic Evidence Department at the Directorate General of Security and Ports Affairs of Abu Dhabi Police, as a regional office for the MENA region. The Forensic Evidence Department will be responsible for providing forensic evidence services in: drugs and chemical precursor analysis, guns and ammunition testing, documents and forged document certification.

This memorandum shows the desire that both sides have to provide technical and technological services while meeting certain standards. It also specifies a sustainable framework to develop the officers’ capabilities in the various forensic fields. This development has the ability to foster forensic justice through skills that meet international standards.

The memorandum of understanding aims to enhance and develop Abu Dhabi Police’s abilities to become the center of excellence for forensic evidence services among the GCC countries and the MENA region.

All releases from Abu Dhabi Police