2,400 Leaders From 48 Countries Around the World Invited to Share Its Knowledge and Know-How on Fostering Saemaul Leaders; Saemaul Movement Selected as One of UN's Poverty Eradication Programs 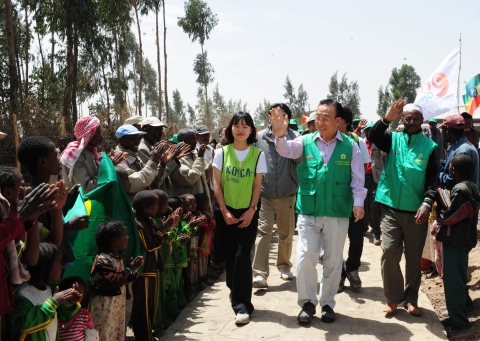 Villages in Handode, Ethiopia are greeting Kim Kwan Yong, Governor of the Gyeongsangbuk-Do(March 20, 2010)

DAEGU, SOUTH KOREA--(Korea Newswire) October 24, 2012 -- The Province of Gyeongsangbuk-Do (“Gyeongsangbuk-Do”) is one of the proud faces of South Korea. It has been known for its long and glorious history, almost unprecedented rate of economical growth in the 1970s and beautiful landscape such as mountains, rivers and ocean.

In the province, visitors can find the cultural heritage of the millennium-old Shilla Kingdom, which built the first unified nation in the peninsula. At the same time, it is the region with advanced technologies where the country‘s electronic, automobile, shipbuilding, and steel industries started. About 1,500 years ago, a nine-story wooden pagoda rising 100 meters in height was constructed in a temple named Hwangryongsa. This was a structure that could only be built using modern construction technologies. Craftsmanship of the Gyeongsangbuk-Do was the foundation for South Korea emergence as the world’s leading IT technology powerhouse.

Another source of pride for the province is the fact that it is the place of origin of the Saemaul Movement, which has become a catalyst of industrialization in the country. This community development program started during the early 1970s in a little village located in the Gyeongsangbuk-Do. It contributed to accelerating industrialization across the country, and is now being expanded into almost every corner of the world, including Asia and Africa, as the world's regional development model.

Under the banner “We Can Do It,” the Saemaul Movement was formed as a grassroots voluntary community program in local districts, and has played a key role in reformation. Rivaling with Protestantism of American colonists, it is identified as one of the world‘s brightest intellectual revolutions. The Saemaul Movement revived South Korea after it had been ruined during the Korean War, and became the dynamism that led Korea to step up as the world’s 12th largest economic power.

In June 2006, Gov. Kim Kwan Yong was inaugurated as the governor of the province. He shed new lights on the Saemaul Movement, and has been the driving force for its globalization.

The globalization of the Saemaul Movement propelled under Kim's leadership is focused on a variety of projects such as fostering foreign Saemaul leaders, sending Korea Saemaul volunteers overseas, and forming Korea-type millennium villages with the UN.

The project designed to host Saemaul leadership education for foreigners initially started in 2007. The Gyeongsangbuk-Do provincial office invited 2,417 people from 48 countries around the world to the province to provide education that is required for people wishing to become Saemaul leaders. Recently, 20 diplomats dispatched to 10 different South Korean embassies voluntarily participated in the education.

The project that sends Saemaul leader volunteers overseas has been led jointly by the UN since 2010. Until now, 152 volunteers have been sent to 14 villages in four African countries -- Ethiopia, Tanzania, Rwanda, and Cameroon -- on four occasions. Volunteers created specific project plans with local village leaders and villagers and are acting as Saemaul evangelists. The provincial office plans to send volunteers to 10 more African nations by 2014.

The provincial office is implementing a Korean-type millennium village promotion (KMVP) with the UN as another form of project that can contribute to foreign expansion of the Saemaul Movement. This project began in 2009, and is increasing the quality of life in developing countries through the establishment of healthcare facilities, waterworks, and schools in Tanzania, Uganda and other countries. Prof. Jeffrey Sachs from Columbia University praised the Saemaul Movement by noting that the “Korean-type millennium village promotion project propelled by the Gyeongsangbuk-Do lays the foundation for community development in developing countries.”

Especially, the Gyeongsangbuk-Do Saemaul Movement Project will join hands with the UN to be promoted as “UN's official world poverty eradication program.”

The globalization of the Saemaul Movement, led under Gov. Kim‘s leadership of persistence and faith, is evolving into a model for developing nations as well as being established as one of the world’s outstanding brands. It is contributing to constructing a blissful global community for coexistence and the prosperity of mankind.

All releases from Province of Gyeongsangbuk-Do